It's time to register for the annual census!  Please visit the website for details.  Once you register you will recieve an electronic package that details the locations, dates and times, what gear to bring, available trails, camping arrangements, and of course how to classify bighorn.

Mandatory orientation will be Saturday March 1 at the forest service meeting hall in Arcadia.  The field survey will be Sunday March 2.

We need all of the help that we can get.  If you aren't able to hike, there are a couple new viewing sites that were added last year that can accommodate persons with limited physical mobility. 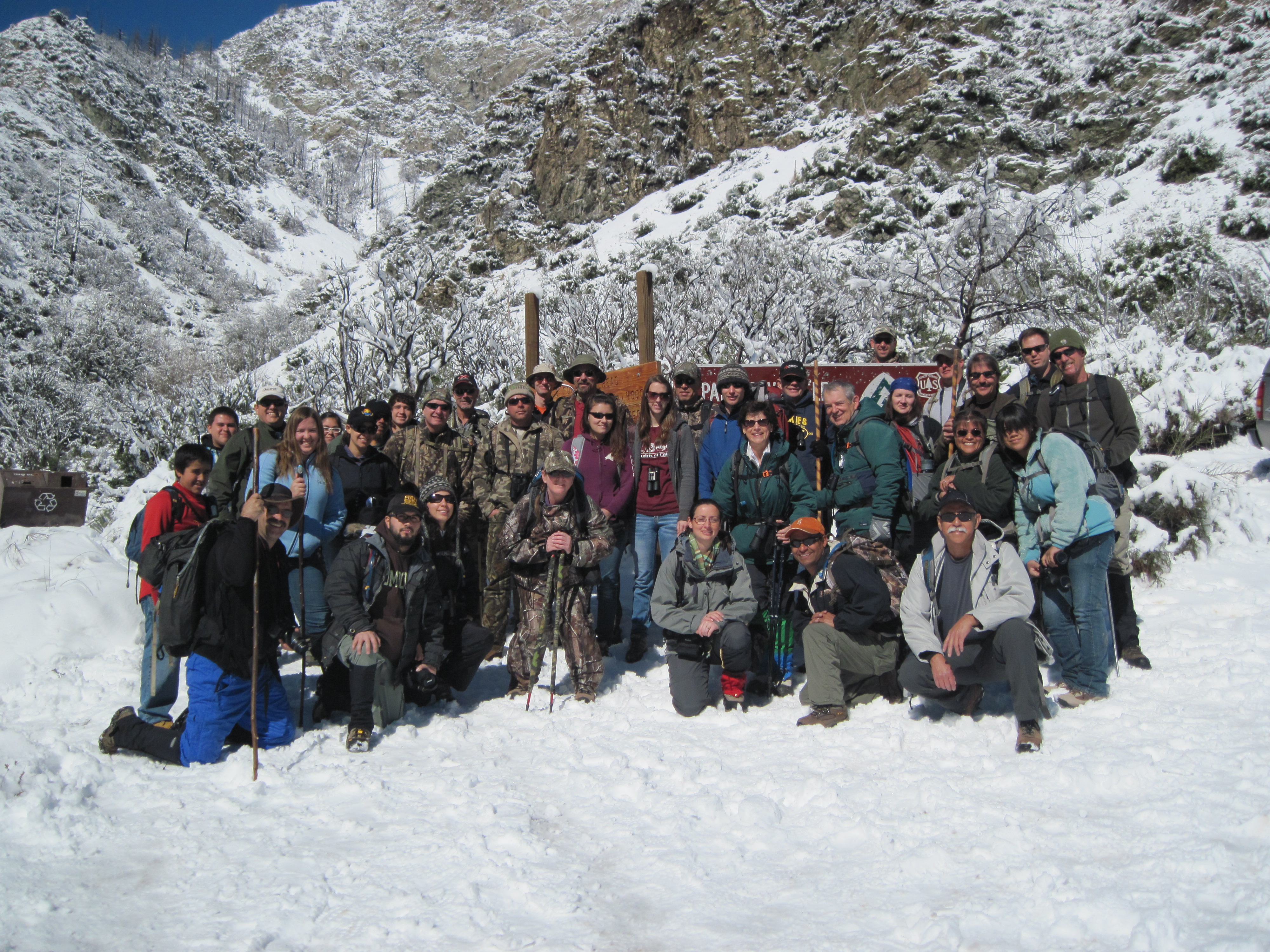 2012 was the first year that pre-registrations were taken through the world wide web.  In previous years the pre-registration was handled by the Lytle Creek Ranger station staff.  This was an out of the ordinary task and due to the phone message system led to many typos and incorrect volunteer contact information. 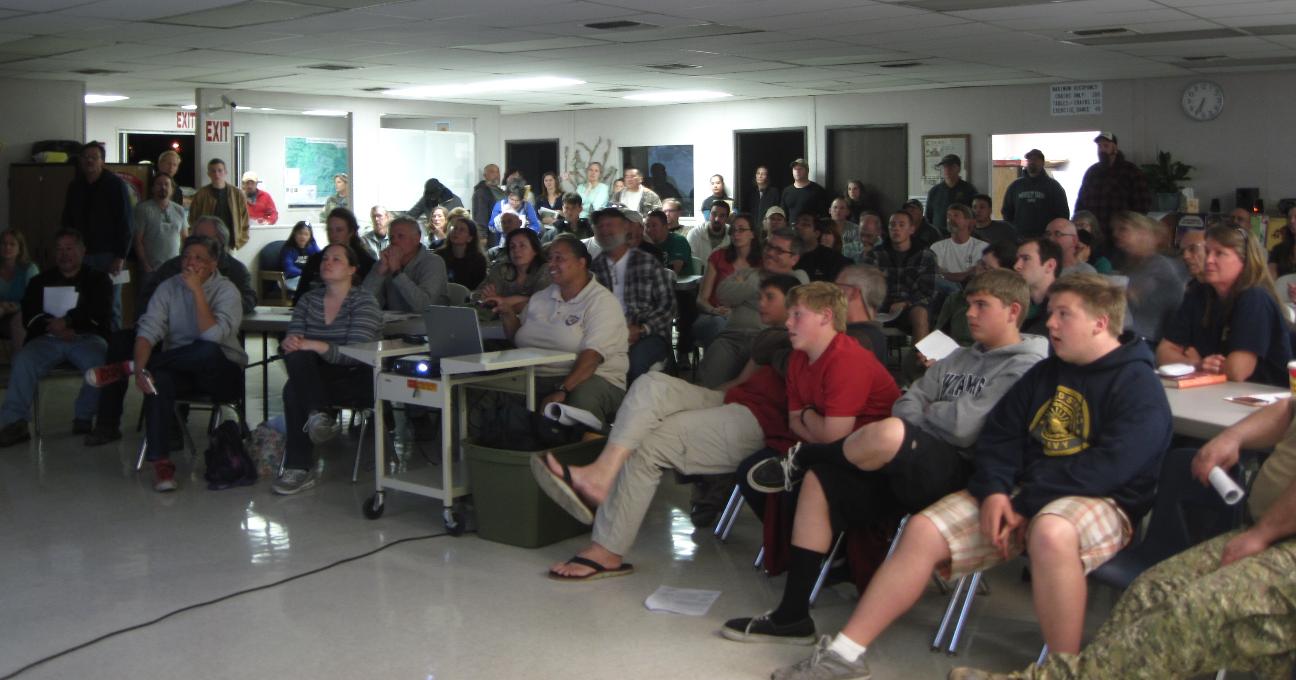 The internet pre-registration was a resounding success.  Over 300 volunteers had registered and the registration effort was closed early.  We were quite worried that not everyone would fit into the Verdemont Community Center (thanks to Norm Lopez for arranging the details!) and we were prepared to split the group into two shifts.  Not everyone that pre-registered showed up at the orientation (probably due to a lower sense of commitment online versus phone calls) but we still had nearly 150 at the orientation.  We did not need our contingency plan and were able to fit everyone in one shift (standing room only though!) Jeff Villpique (DFG) gave some background about the bighorn sheep and the San Gabriel herd in particular, Chanel Davis (DFG) gave a presentation about how to classify sheep into ewes, rams and lambs (even had some practice photographs) and our own boardmember and ex-Marine, Neil Ringlee, explained the necessary personal gear and emergency preparedness.

The outstanding volunteer turnout generated full crews for all of the trails.  SCBS volunteers led public observers into several of the trails.  John Nelson led Lookout Mountain, Gary Thomas led a troop of Boy Scouts into Cattle Canyon for an overnight stay, Neil Ringlee and Tom Davis led South Fork of Lytle Creek, Norm Lopez and Bill Norman led Day and Deer Canyons and Steve Marschke and Debbie Miller led Middle Fork of Lytle Creek.  We had a new trail leader this year with George Sutton taking over Barrett-Cascade as our previous leader John Hybarger was out of town.

We didn’t have the heavy snowfall like 2011 and the temperatures were balmy for March – nearly 80 F at the lower elevations, and the sheep that were found were at higher elevations.  There was a new helicopter contractor this year as Landell’s Aviation had retired and sold after participating in DFG work for about 30 years.  According to Jeff Villipique of DFG, the new company, Guardian Helicopters of Van Nuys did an excellent job and were flying a very capable A-Star model that performed excellent despite encountering some high winds.  With the new pilot and a few fresh sets of the eyes in the bird the aerial counts were a bit lower than in previous years.  Coupled with the higher than normal temperatures and lack of snowfall this will likely cause the population estimate to have a larger than normal uncertainty.

I didn’t get the full reports from all of the trail leaders but Barrett-Cascade sighted one sheep and a few deer and Middle Fork sighted 24 sheep in 4 bands, seven of which were seen from two of the observation points.  Jeff Villipique will compile all of the observation reports and calculate the population estimate, look for the report in the next few weeks.  Many thanks to all of those that participated in one way or another and we hope so see all of you again next year.

Every year in February or March, the California Department of Fish and Game organizes an event to count the population of bighorn sheep (Ovis candadensis nelsonii) in the San Gabriel Mountain Range.  This survey is held with the support of the National Forest Service.  This work is important as it indicates the overall health of the herd.  This herd has been used in the past as a source population for translocation efforts to re-populate herds in the Mojave desert that have been extirpated.  Due to the low carrying capacity of the desert habitat and the attendant small herd groups, it is a natural occurrence that some bands of bighorn sheep will die leaving the range vacant.  It is also natural that the ranges with larger populations of bighorn would naturally re-colonize the vacant ranges. Biologists call this system of herds a metapopulation.  However, through the development and occupation of the desert by humans, much of the natural repopulation efforts are not successful because man-made structures like highways, renewable energy developments and aquaducts have restricted bighorn movement.  Translocations are thus necessary to properly manage and conserve the bighorn sheep such that future generations of humans may enjoy their presence.

The San Gabriel Survey utilizes a simultaneous ground and aerial count.  Several bighorn sheep in the region has been marked and collared in the past.  With re-sighting of the marked sheep and the overlapping aerial and ground crews, a reliable estimate of the population can be derived through statistical methods based on the actual observations.  The ground crews are manned by volunteers from the general public.  The DFG provides a mandatory orientation the evening before the count so that the volunteers can be educated in observation and classification techniques.